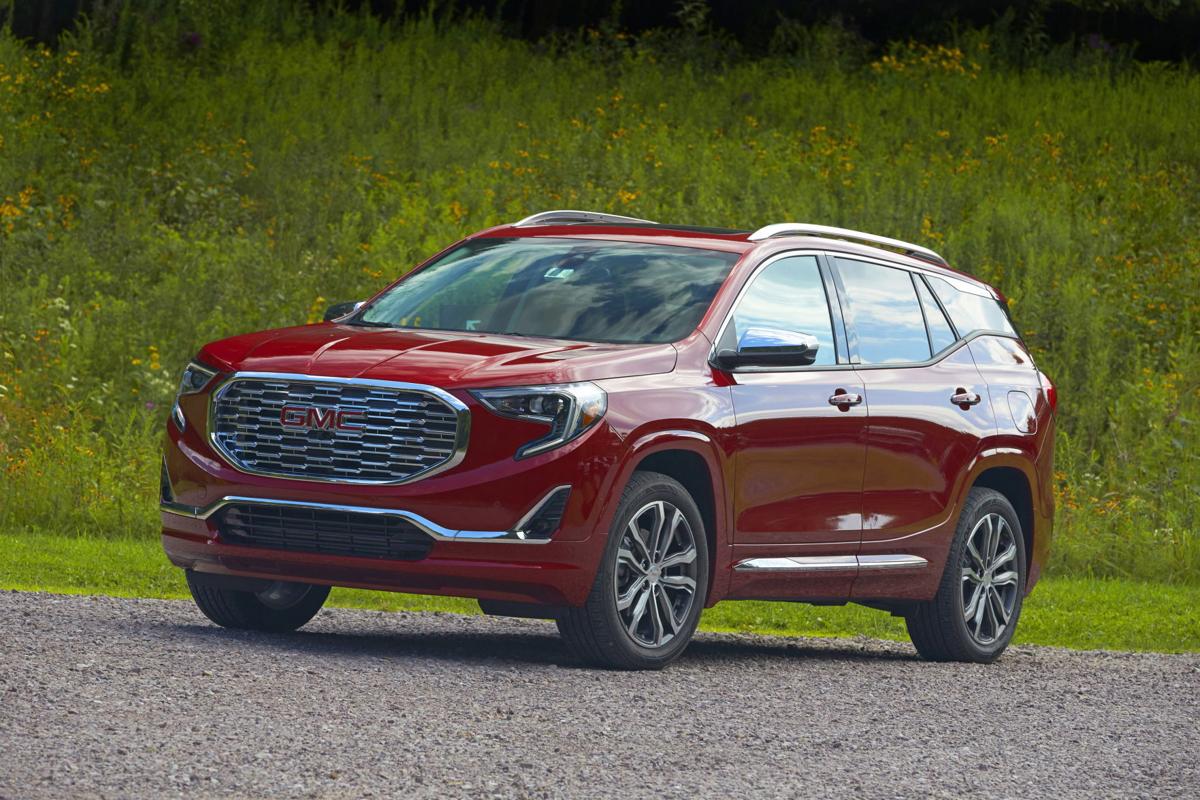 Styling is bold and distinctively GMC. 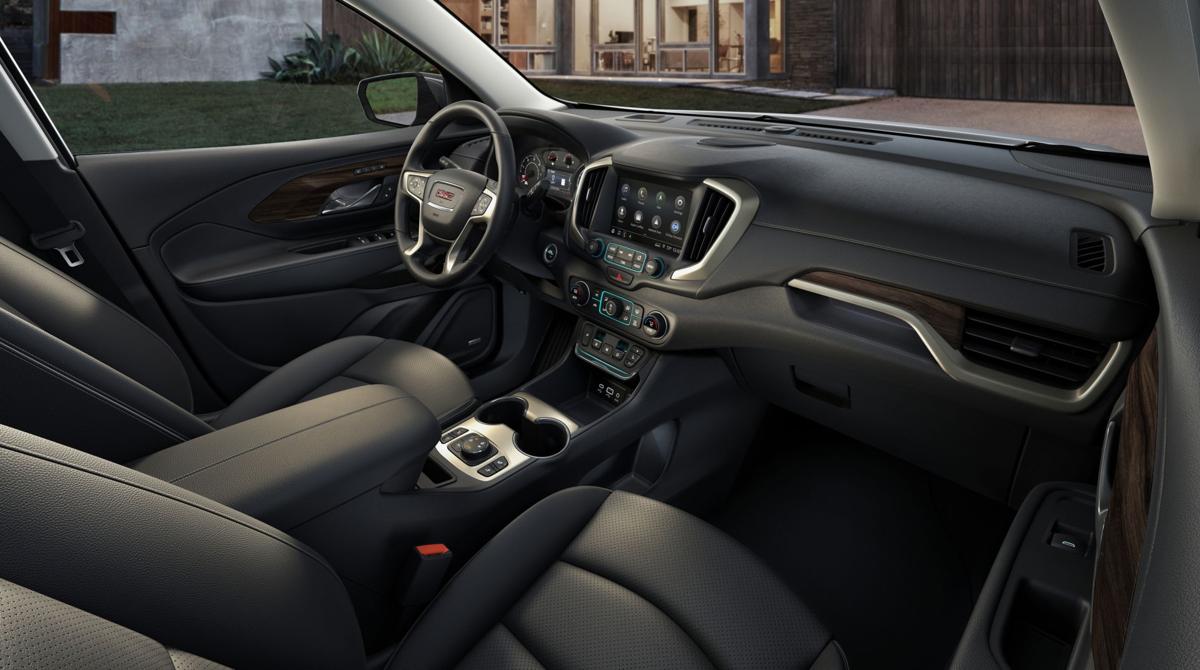 The interior of the Terrain Denali is spacious and contemporary. 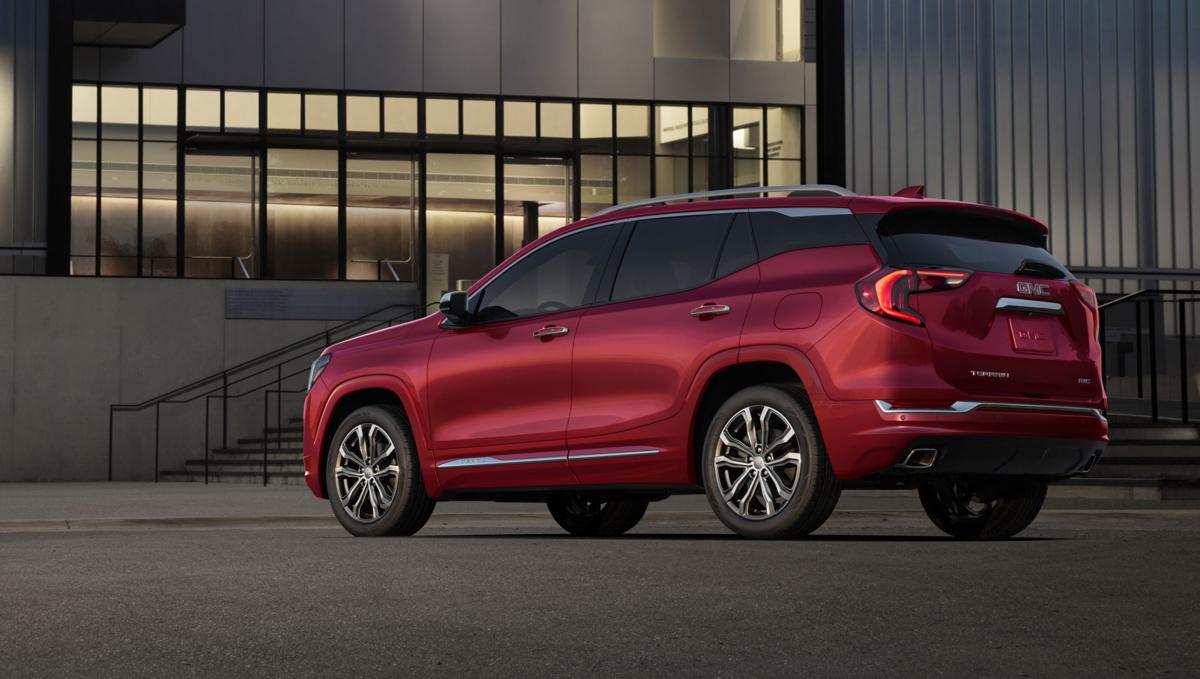 Rear quarter view, with styling that is fresh and edgy. 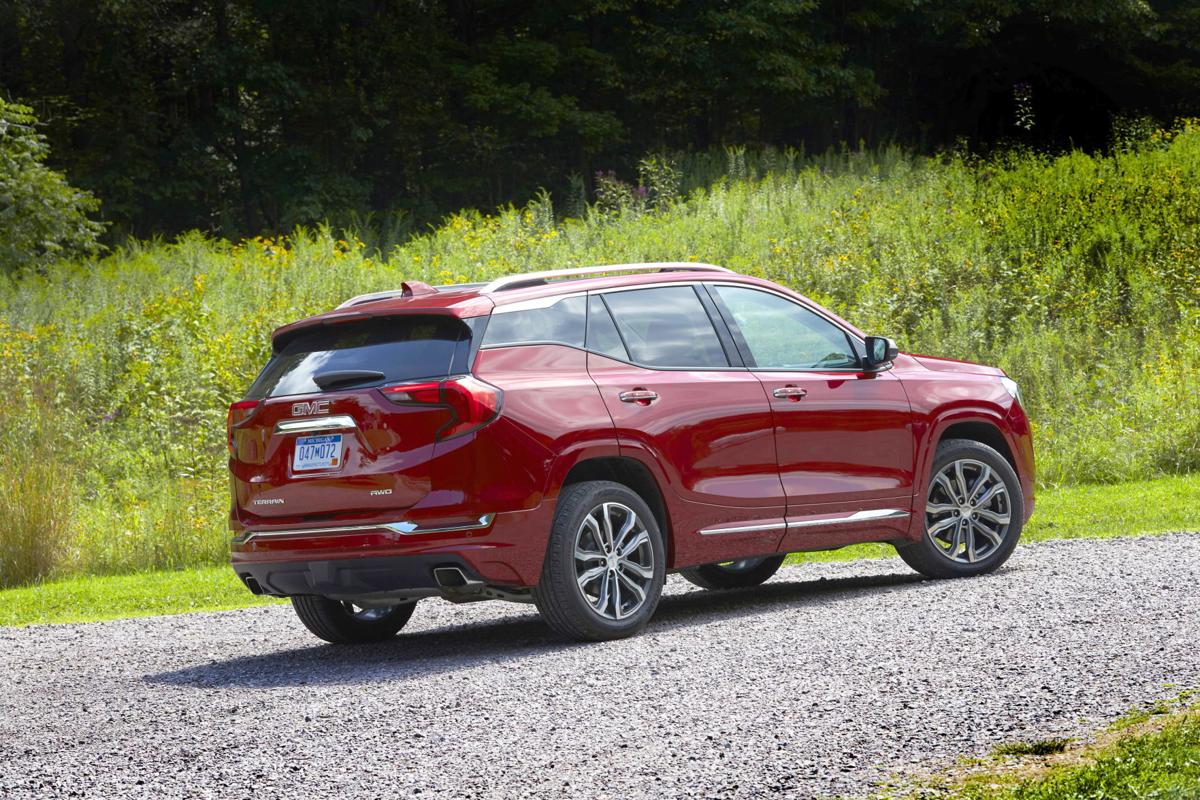 GMC Terrain Denali was at home on and off pavement.

The “we are professional grade” GMC division has raised the bar with the new 2019 GMC Terrain AWD Denali – the second year into this second-generation Terrain model. Our week-long test drive left us with a favorable view of the Terrain overall – where it stood out in overall comfort and luxury, road manners, and distinctive styling inside and out.

A relative newcomer in the auto world, the first-generation Terrain made its debut in 2009 at the New York Auto show as a 2010 model. That model featured boxy styling, with oversize squared-off fender wells. This second-generation model made its debut last year at the Detroit Auto Show (NAIAS). Gone is the boxier styling, with the new model featuring a distinctive rear quarter window treatment that could’ve been inspired by the eye mask of Zorro. It’s styling makes it stand out from the crowd, and it’s consistent with the Denali line.

A large part of GMC’s sales success comes directly from this model. Terrain sales were up 33.8% in 2018 over the prior year, a direct validation that customers like this model. And Denali makes up about a third of all models sold.

“GMC’s strong growth over the past decade is due in large part to Terrain, which introduced a new generation to this premium brand,” said Duncan Aldred, vice president of GMC Sales and Marketing. “The all-new Terrain builds on that success, leveraging GMC’s proven SUV experience to shake up one of the largest vehicle segments, with a strong blend of design, functionality and engineering excellence.”

The all-new Terrain’s exterior design signals the next chapter of GMC’s design language, evolving the brand’s signature cues with stronger, sharper and more sculpted elements such as the grille and lighting features.

“It is a striking design with functional beauty,” said Helen Emsley, executive director, Global GMC Design. “There’s confidence and optimism in its stance, with exceptional attention to detail that speaks to GMC’s rise as a premium brand.”

Our test car had the 2.0L turbo engine, which had a strong feeling of torque and power output. A range of three new turbocharged engines, including a 1.6L turbo-diesel, provides more choices when it comes to performance, efficiency and capability. New 1.5L and 2.0L turbocharged gas engines are matched with two unique new nine-speed automatic transmissions, with the 2.0L turbo engine offering stronger acceleration and a higher degree of performance than its 1.5L counterpart.

Although it took some getting used to, we liked the snazzy new Electronic Precision Shift, which enables more storage room in the center console by replacing the conventional transmission shifter with electronically controlled gear selection consisting of push buttons and pull triggers.

A handy feature for our winter test is the standard driver-controllable Traction Select system, which has choices for different driving conditions. Elements such as the throttle responses are optimized for the selected driving mode. AWD models include a FWD mode that disconnects the AWD system to minimize drag and optimize fuel economy, while the AWD mode offers all the benefits of an active AWD system.

We were impressed with storage space. An expanded center console with pass-through storage underneath and side-by-side cupholders adds to the functionality. A new fold-flat front passenger seat and flat-folding rear seat help Terrain offer greater versatility for stowing longer items and make it easier to load cargo. There are also new under-floor compartments in the cargo area for more secure storage.

Connectivity is at level you’d expect in a Denali package and this price point. We stayed connected with our 8-inch-diagonal infotainment system, featuring compatibility with Apple CarPlay and Android Auto functionality and a standard 4G LTE Wi-Fi hotspot that can accommodate up to seven mobile devices. We could also manage the vehicles remotely with the myGMC mobile app via our compatible smartphones. It’s a high tech cocoon that is rounded out with the as-expected Bluetooth connection.

An expanded range of available active safety technologies – including the new bird-eye view Surround Vision, forward collision alert, auto-braking, lane keeping and alert, and more. Our favorite systems are the Rear Seat Reminder and Teen Driver. Rear Seat Reminder alerts drivers to check the back seat as they exit their vehicles under certain circumstances, while Teen Driver allows parents to set controls and review an in-vehicle report card in order to help encourage better driving habits, even when adults are not in the vehicle.

Overall, we like the new 2019 GMC Terrain AWD Denali, and if a premium SUV is on your list, you should test drive the Terrain. Combined MPG rating is 23-mpg, but we got slightly better on our drive. Pricing starts at $39,500 with test car priced at $43,650 nicely equipped. Incentives and offers will likely bring transaction pricing down, see your local dealer or visit www.GMC.com for more details.