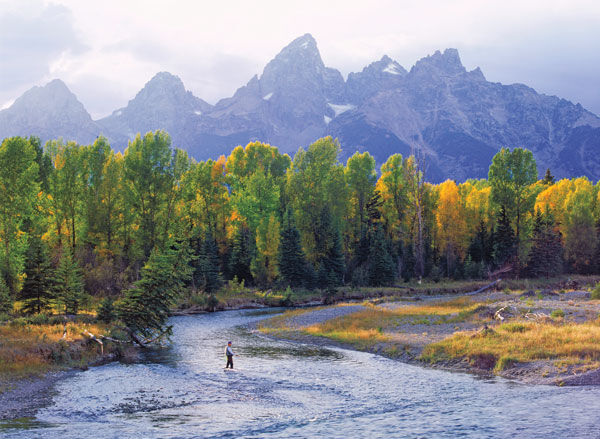 The ranch location region includes spectacular scenery, views of Grand Teton, and is a prime fly-fishing location in the valley on Fish Creek and the Snake River. 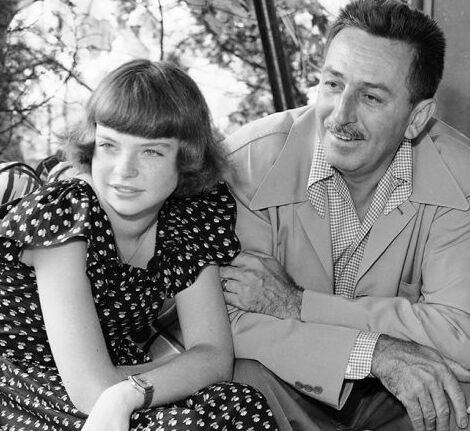 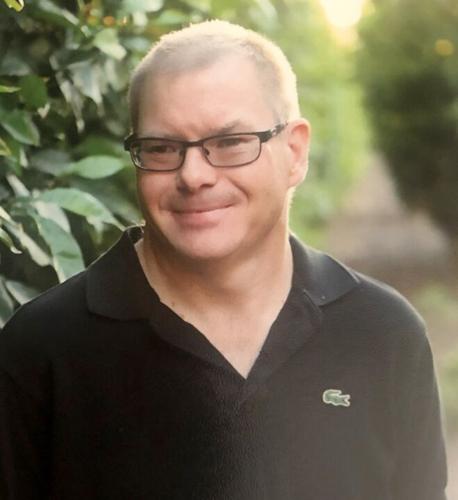 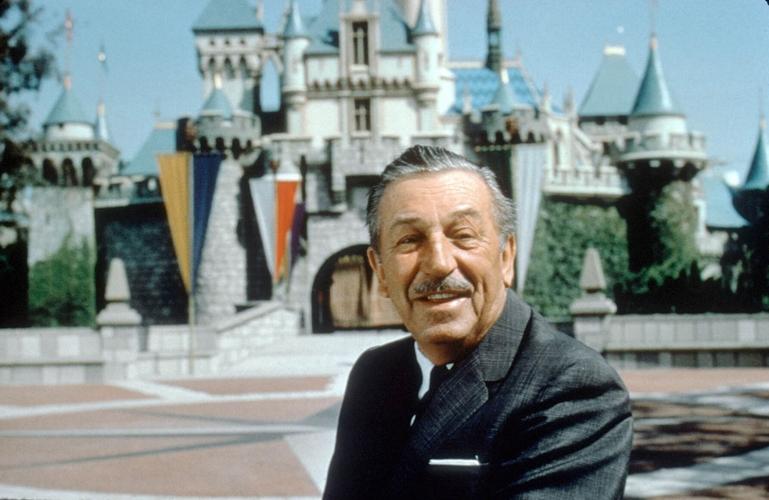 Walt Disney at the center of Disneyland in Anaheim, CA in the mid-1960's. 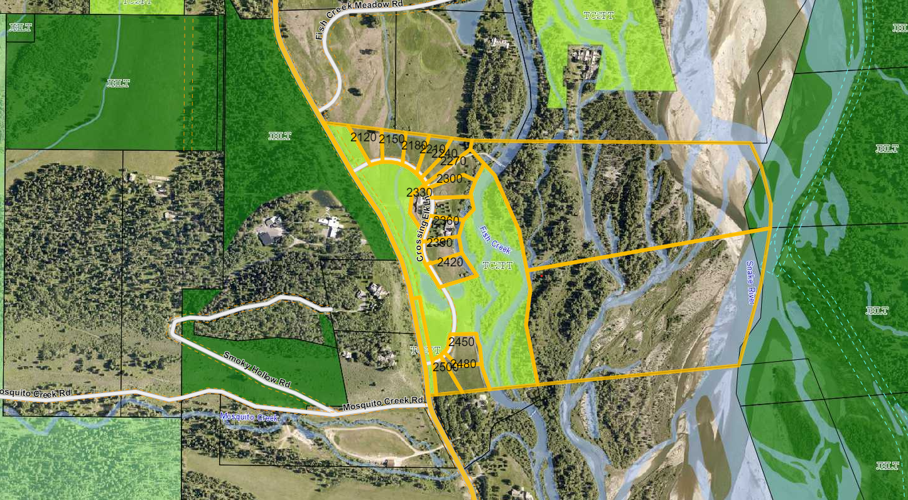 Ranch boundaries and divisions shown, made up of the several parcels shown in yellow, occupying everything between Fall Creek Road and the Snake River. 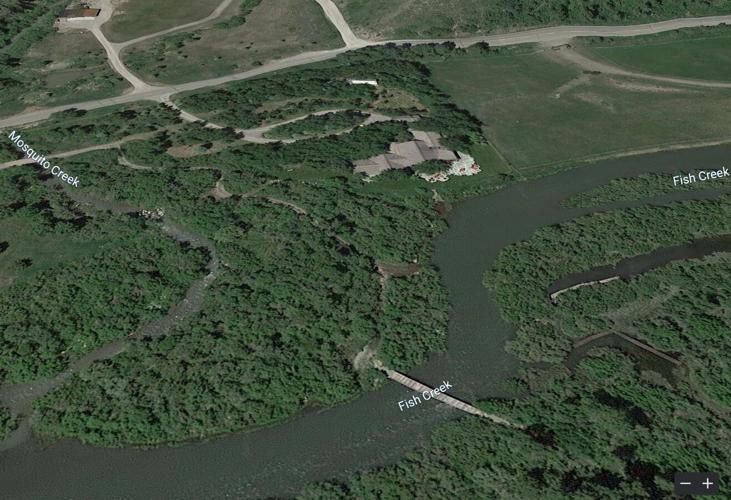 View of the ranch headquarters (center), West of Jackson along Fish Creek and the Snake River, at the West Bank South area of Jackson Hole, in Wilson, WY – population 200.

The Code of the West says, “Remember that some things aren’t for sale,” but Disney heir’s California trustees have different designs on the ranch

(CHEYENNE, WY) A picturesque 110-acre Wyoming ranch in Teton County is at the center of a multi-million-dollar battle by Walt Disney's grandson, Bradford Disney Lund, to secure control of the inheritance put in trust for Lund by his mother, Sharon D. Lund.

The Code of the West seems to elude Lund, who hopes that the Wyoming ranch will continue to be retained by the trust as was intended for use and enjoyment by him and his family. Lund is ensnarled in California's notoriously abusive-prone probate system. As full as Walt Disney was with imagination, he likely would have never dreamt that such an unhappy circumstance would unfold for his grandson.

Hanging in the balance is "Eagle South Fork," the family ranch that is located in Wilson, Wyoming, in Teton County, in the shadow of Grand Teton, not far from Jackson Hole. It's been a Disney family treasure for decades.

But the California trustees of the estate have different designs on that ranch and recently sent Lund a letter demanding that he buy the very ranch of which his trust already owns one-half, or they'll sell it to other outside buyers for millions, which would be contrary to his mother's clear intent according to Lund's filings. In that letter, his trustees – who by law should only act in his best interests – gave him just a few days to pay up with his personal funds at a higher price than would be the case if the ranch were restricted to family uses and contrary to what the trustees and his sister had previously agreed.

In an exclusive interview with The Cheyenne Post, Lund said that "the ranch isn't for sale, I don't want it sold," making it clear that he wants the ranch to stay in the family to continue to enjoy, and not break up and develop. The California trustees apparently have never heard of one of the Codes of the West – "Remember that some things aren't for sale."

Concerning the sale of the Wyoming ranch, Lund objects to any such sale, stating that it would be in violation of the family's long history over 40 years of wanting to keep the 110-acre ranch for the children's use and enjoyment during their lifetimes.

So, Lund went into the district court in Teton County to stop the trustees from selling the ranch to outsiders against Lund's wishes. The Trustees attempted to move the case to California instead of Wyoming because they claimed it was more convenient. The trustees apparently believe that a California court might be more friendly and certainly a world away from understanding Wyoming and better to decide the fate of that little patch of Wyoming ground. The court agreed to transfer the case to California and dismiss Lund's case.

However, Lund recently filed a motion to alter or amend the judgment, which would, in effect, allow the judge to take another look at his decision to transfer the case to California. If the judge does not change his transfer ruling, Lund intends to appeal to the Wyoming Supreme Court.

In our exclusive interview with Bradford Lund this week, he shared ranch stories– most stories were happy, and some were sad.

Happy stories recall his father, Bill Lund, developing and building the ranch decades ago, and Lund helped his father set fenceposts (a Wyoming art form), fly-fishing on Fish Creek (the ranch is on the banks of the creek, itself on the edge of Snake River), horseback and ATV adventures and more.

Among the most moving is Brad's desire to establish a permanent memorial for his father on the ranch that Brad says his dad loved so much and always intended to remain with the family. "I'd like for my father's ashes to rest on this ranch (allowed in Wyoming)," Lund said.

Sad stories were – frankly – shocking. Previously able to use and enjoy the ranch whenever he and his family wished, Lund said they have been essentially alienated and deterred from enjoying the ranch due to the trustees' conduct.

"I feel that we were treated viciously by the trustees," he said. Lund also claimed, "the trustees have shown hostility towards me by demanding I move my personal items contained in my bedroom at the ranch to the garage contrary to my custom for the previous 25 years. Also, the trustees ordered that the property of my family, who visit the ranch with me, be removed from the ranch completely. I believe that these actions by the trustees are for the sole purpose of harassing and exerting control over me, demonstrating their consistent hostility towards me. They boxed up all of our possessions and sent them to us."

FDA orders Juul to pull all its e-cigarette products from U.S. market

When Lund tried to place some personal items back at the ranch, "they put my stuff in trash bags and threw it all away."

In my conversation with him that lasted over an hour, Lund very clearly and concisely articulated stories and long-ago memories of enjoying the ranch over the years with his family and the details of his dispute with the trustees that go back years.

"All I want is my freedom, to have what is mine," he said. He clearly has a firm understanding of the complexities of his estate and how he wants to preserve and manage it. Lund said the trustees have kept control of his estate by falsely asserting he isn't competent to manage it himself, despite the fact that an Arizona judge after an extensive trial found that he was competent to handle his personal and financial affairs. This finding was confirmed all the way up to the Arizona Supreme Court. His twin sister Michelle Lund in sworn court testimony, agreed.

When reached by telephone and asked about the issues, Newport Beach, CA. based Douglas M. Strode, one of the trustees, answered questions about the ranch and Mr. Lund with a simple answer, "no comment."

For nearly the past decade, Lund has battled estranged family members, trustees, and probate court officials, proving again and again that he is mentally fit to manage an inheritance worth over $400-million. He's had to prove that he doesn't have Down syndrome, as a California judge wrongfully asserted, despite being presented with DNA evidence contradicting his speculation. A court in Arizona even agreed and found Lund capable of handling his affairs.

In representing the Disney heir, attorney Lanny Davis is no stranger to complex legal matters. He served as special counsel to then-President Bill Clinton in the late 1990s and as privacy and civil liberties advisor to President George W. Bush from 2006-2007 and represented President Donald Trump's former personal attorney, Michael Cohen. Davis chose to join the Lund legal team out of his concern for the injustices done to Lund.

Mr. Lund's choice of attorney, also including renowned Scottsdale litigator Sandra Slaton, might alone quash any doubts about his ability to manage his affairs.

Lund asserted in his court papers that the new proposed sale would be a violation of a prior deal for him to acquire his twin sister's other half of the ranch share, and the 40-year intent of Mr. Lund's parents to keep the Ranch in the Trust for the children's lifetime use and enjoyment. "Our family has always treasured the pristine environment – the rivers and streams and forests and wildlife – of our ranch over many years. We do not want it to be changed."

In his filings, Lund asserted: "An undeniable benefit will be to the Trustees based upon their Real Estate Fee. The Trustees will receive 2% of the purchase price." The trustees have described this fee as "extraordinary." According to the terms of Lund's and his twin sister's trusts, as explained in the legal filings, neither Mr. Lund nor his sister would personally receive an economic benefit if the ranch were sold at the higher price based on commercial subdivisions of the ranch.

Saving the Wyoming ranch would be one step closer for Bradford Lund toward putting the family disputes the trustees created behind him and living his life in peace and freedom.

Liberating himself from the trustees who he says have harmed him so badly over the years is his ultimate goal. "The system is broken," said Rick Black, a director at the Center for Estate Administration Reform in North Carolina. "This is purely an estate-trafficking case, and it is being managed by predatory attorneys," Black told Tony Saavedra of The Orange County Register last year (Lund articles here and here).

Would you like to receive our newsletter? Get local, Wyoming, and national news, the weather forecast, and more, delivered to your inbox every weekday morning.